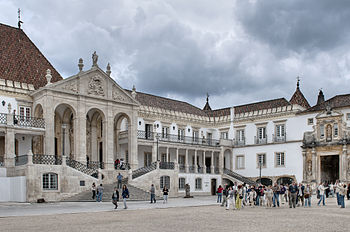 The University of Coimbra (UC; Universidade de Coimbra) is a Portuguese public university in Coimbra, Portugal. Established in 1290 in Lisbon, it went through a number of relocations until it was moved permanently to its current city in 1537, being one of the oldest universities in continuous operation in the world, the oldest university of Portugal, and one of the country's largest higher education and research institutions. The university is organized into eight different faculties according to a wide range of fields, granting academic degrees in nearly all major fields of knowledge, such as arts, engineerings, humanities, mathematics, natural sciences, social sciences, medicine, sports and technologies. It is a founding member of the Coimbra Group, a group of leading European research universities, whose inaugural meeting it hosted. The University of Coimbra has over 20,000 students, and hosts one of the largest communities of international students in Portugal, arguably being the most cosmopolitan Portuguese university. On 22 June 2013, UNESCO added the university to its World Heritage List.

RATINGS OF University of Coimbra